Home » Design » Fusion 360 vs Solidworks: How Do they Compare?
Design

At their core, they are pretty similar because they’re both CAD software Solidworks is more advanced and refined. Fusion 360 has simpler features but is easier to learn. 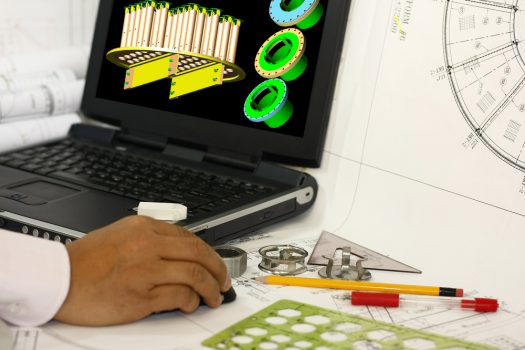 Solidworks has been a leader in Computer-Aided Design (CAD) modeling, especially in engineering and manufacturing, for a long time.

However, in 2012, Fusion 360 started offering cloud-based CAD services, giving Solidworks a run for its money. So, how do these softwares compare?

In general, Fusion 360 and Solidworks have the same uses and applications. However, Solidworks has more refined features aimed at the engineering and manufacturing world. In contrast, Fusion 360 has more but simpler features. It is also easier to learn and use.

This article looks at the similarities and differences between Fusion 360 and Solidworks as CAD software. Keep reading to find out which one is best for you.

Fusion 360 is a cloud-based CAD, 3D modeling, CAM, Computer Aided Engineering (CAE), and PCB software platform for professional product manufacturing and design. It is designed and retailed by Autodesk.

The tool has wide personal, business, and industrial applications. With Fusion 360, you can use it for precise modeling of 2D and 3D objects, animate your designs, simulate loads, render objects, and even prepare models for CNC machining.

Thanks to its CAD, CAM, and CAE possibilities, many small and large enterprises also use Fusion 360 to design and prototype their products.

One of Fusion 360’s major selling points is its cloud functionality, which allows multiple people to work on one design in real-time. This is ideal for collaborative projects and remote working.

What is Solidworks Used For?

Solidworks is an industry-leading CAE and CAD software. It is used across different professions and industries for its wide range of features and high functionality.

Solidworks uses parametric design, making it an effective tool for designers and engineers.

This means that the designer can see how changes affect the neighboring components or the overall solution.

For instance, if a single component is enlarged, it would affect the size of the hole or joint it’s attached to. This makes it easier to spot and correct design flaws.

Similarities Between Fusion 360 and Solidworks

At their core, Fusion 360 and Solidworks are pretty similar because they’re both CAD software. As a result, they have several similarities, including:

Both Solidworks and Fusion 360 allow you to create realistic simulations for your designs.

In Solidworks, you can create animations through the motion manager, which lets you drag different stages of the design through a time bar. You can also use the “animation assistant” to create animations and add bursts, rotations, and gatherings to existing motion studies.

Fusion 360 supports keyframe animation to make all types of animations for assemblies like gearboxes, chainsaws, etc. You can move your components and animate them in a timeline through the Transform tool.

Generally speaking, both applications save the same purpose. They are great mechanical engineering tools and focus on the manufacturability of products rather than how they look and feel.

They are also used in the same industries for manufacturing, design, and even education. Both tools are also versatile and are used by big corporations as well as hobbyists.

Fusion 360 introduced a revolutionary cloud-based parametric model which means that all the data is saved in the cloud, not locally on your computer. This way, your team can access the project from anywhere in the world.

While Solidworks was initially an offline software, it now also offers cloud-based solutions. This gives you the option between cloud and desktop solutions.

Differences Between Fusion 360 and Solidworks

While Fusion 360 and Solidworks are similar in some ways, they’re very different in others. Let’s look at some of the major differences between the two applications:

Fusion 360 is available for both Mac and Windows operating systems. The tool offers identical features on both platforms, giving users on both ends a similar experience.

Solidworks, on the other hand, is designed with windows in mind.

To use it on Mac, you’d have to use set up virtual machines or parallels which can be intimidating for the average user. It’s also less convenient and complicated for general use on Mac.

The two applications also differ in their system and hardware requirements.

Here are their recommended requirements:

From these requirements, Solidworks is definitely more demanding and requires a more capable (hence expensive) system.

There are also a few differences between Solidworks and Fusion 360’s main features. In terms of 3D design, they offer a parametric modeling technique, which makes them pretty similar, but it’s in parts and assembly that the tools begin to drift apart.

Solidworks is an assembly-oriented application, which means the parts are created and saved individually before being assembled in a different file. This is particularly advantageous when the same part is used in different assemblies, and it makes documentation easier.

On the other hand, Fusion 360 uses a multi-component part system. This is where multiple parts are created and assembled in the same file.

This makes it easier for users to create and reference new parts within an assembly. However, sharing parts between different assemblies is not as seamless as it is on Solidworks.

While Solidworks offers a similar feature, it’s more complicated to set up and execute.

Fusion 360 has a comprehensive set of 3D modeling tools and features, which make it easy for you to create your design in three dimensions. It also designed to be flexible and with a gentle learning curve with great push/pull tools for creating organic surfaces and geometry.

Solidworks also brings a decent amount of 3D modeling tools, with the exception of sculpting. Some processes also have longer workflows.

For instance, Fusion 360 comes with a myriad of preset construction geometry which allows even inexperienced users to create basic geometric shapes.

Since Solidworks and Fusion 360 are both high-end CAD solutions, they offer similar interfaces with ribbon-style top menus, side panels on both sides of the screen, and a feature tree timeline when in parametric modeling.

However, for Solidworks specifically, the interface might feel overwhelming with many small buttons and icons.

A big advantage of Solidworks over Fusion 360 is the ability to customize keyboard shortcuts and mouse buttons which makes routine workflow much easier.

The Fusion 360 interface is more friendly, especially for new users. It is also cleaner and more polished.

The different functionalities are separated into different workspaces, so the entire screen changes according in line with the current task. This clears space by removing unnecessary tools.

Ease of Use Comparison

Beginners are likely to have trouble using both Solidworks and Fusion 360 because they require some experience with CAD applications. However, they’re not extremely difficult to learn.

Solidworks has a steeper learning curve but is ideal for mechanical engineering jobs. It has a wide set of tools that make the process of creating a 3D result of a part of a machine easier. Its interface also contains some powerful but underused tools.

In contrast, Fusion 360 offers simpler, but easier-to-use simulation packages. These features are more suitable for the early stages of design. While it lacks the more advanced analysis tools, the simple simulation makes it ideal for non-technical users.

In fact, Fusion 360 has been leaning more toward 3D printing workflows, especially with the introduction of the 3D slicer.

Photoview 360 allows you to manipulate the appearance, scene, and lighting and apply other specifications to the model. The add-in is available for Solidworks premium and professional packages.

In Fusion 360, you don’t need an add-in to make incredible renders. You just need to navigate to the model or patch icon and hover until it gives you a “render” option.

The tool gives you the option to choose the type of rendering process (quick, normal, or advanced.) This allows you to do a quick render to see how everything looks, make the necessary adjustments, then proceed to the advanced render.

Both Solidworks and Fusion 360 are immensely supported by their developers. Dassault Systèmes and Autodesk are huge companies with officials in different countries.

Solidworks in particular has tons of learning resources online. With a stronger presence in the market, it is also taught in technical universities and third-party certification programs.

If you run into a problem with the application, you can get online support, consult in the official forum, or talk to local resellers.

The last thing we’ll talk about is the pricing difference between the two programs.

Fusion 360 has a completely free license for those in education (students and teachers.) It also has paid packages that start at $60 a month. It is also free for 3 years for personal use and hobbyist businesses that make less than $100,000 a year in revenue.

Solidworks doesn’t have a free option and its packages are quite expensive. Solidworks licenses start from $4000 and can go upwards of $7000 for a premium license.

While these are one-time payments, they’re quite an investment. As a result, Solidworks is mostly used by professionals and established businesses that can afford the licenses.

Which Is Better Fusion 360 or Solidworks?

Overall, Fusion 360 is a better package than Solidworks.

However, it is limited by the fact that it’s a cloud-only tool, therefore inconveniencing people who prefer to work locally. It also lacks the more robust industry-grade features of Solidworks, making it less suitable for industrial use.

Can You Open Solidworks Files in Fusion 360?

Yes. You can import Solidworks files into Fusion 360. All you have to do is upload them.

Is Fusion 360 Still Free for Hobbyists?

Yes. Fusion 360 is free for 3 years for personal use and for hobbyist businesses that make less than $100,000 a year in revenue.

Do Professionals Use Fusion 360?

While most professionals use Solidworks, there’s a growing shift towards Fusion 360. This is especially because of its cloud capabilities which make collaborative projects easier.

Krita vs GIMP: Which is a Better Photoshop Alternative?

Data Mart vs Data Warehouse: What is the Difference?

Krita vs GIMP: Which is a Better Photoshop Alternative?