InVision vs Adobe XD: Which Is a Better UI/UX Design Tool?

InVision is ideal for handoff. And the platform’s free plan includes way more features than XD’s Starter subscription. Teams on a tight budget should definitely consider InVision over XD. 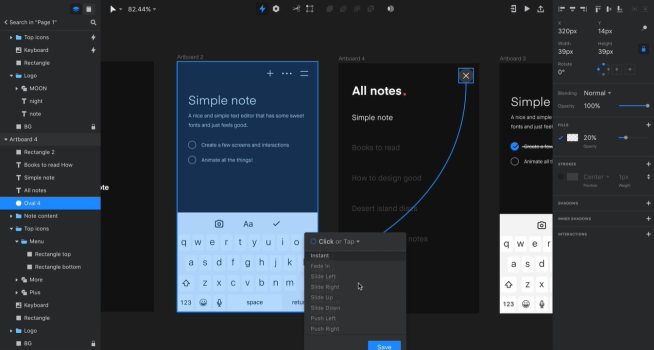 InVision Studio and Adobe XD are helpful design tools with great collaboration features. Both systems are vector-based, and they include useful features like prototyping and auto-generated code snippets.

Choosing which platform to use can be overwhelming. To help you pick, we analyzed each system based on key factors like pricing and developer handoff.

Overall, Adobe XD is better if you need to edit with other designers in real time — but we think InVision Studio’s free tools are hard to beat.

What Is InVision Studio Used For?

InVision Studio is meant to be used in tandem with the broader InVision platform. (For this comparison, we’ll just refer to InVision Studio as InVision.) Teams can develop prototypes, wireframes, and more, then use InVision’s online collaboration tools to manage developer handoff and plan updates. They can also collaborate on a digital whiteboard to brainstorm and coordinate projects.

What Is Adobe XD Used For?

Teams use Adobe XD to develop UI/UX projects. With handoff features like auto-generated CSS, teams can manage design and development through a single platform. XD’s desktop app features Coediting, allowing multiple designers to work on projects at the same time from separate devices. Users also develop prototypes with XD and share them via public links.

Both platforms include useful prototyping features. You can connect design elements with a simple drag-and-drop system, then the platforms generate auto-animation to simulate movement throughout the UI. Both tools also let users share interactive prototypes for stakeholder review.

InVision and XD have solid collaboration features. With XD’s Coeditng, you can manage design development among team members. InVision offers controllable roles and permissions levels like editor and viewer only so each stakeholder gets the precise access they need. You can also make shareable component libraries and project style guides.

The key difference between InVision and XD is collaborative editing. Unlike XD, InVision doesn’t support real-time co-editing with other designers. Instead, InVision users make designs on the desktop app, then push those designs to the browser system. Teams comment and brainstorm online, but design changes have to be made via the desktop app.

XD supports more file types than InVision. Both support SVG files, which makes it easy to import designs from other platforms. With InVision, you can use plugins to import files that aren’t natively supported — but there isn’t a plugin to import XD files.

● Does InVision work with Adobe XD?

InVision and XD are compatible via SVG files. There isn’t currently an option to import XD files directly into InVision.

● Does Adobe XD work with InVision?

In XD, you can right-click or use a keyboard shortcut to create a component. Instances can vary, or you can make changes to the main component for project-wide updates. You can also make a shared component library for teams.

InVison has a similar component system. Components are created with a few simple clicks and you can add them to a library.

Components are easily labeled and managed on both platforms, and you can click them to access the library.

Components are similar on both platforms — but we prefer InVision. Making a new one is a little more intuitive, and we like how the “create component” button is easily accessible via the toolbar.

InVision’s user interface is pretty similar to XD. Opening the app, you can choose an artboard to design with a specific device in mind. The canvas will open next, giving you room to work on multiple design aspects.

On both platforms, the right-hand side of your screen changes depending on what tools you’re using. The left is mostly static and displays links to component libraries and design pages.

The UIs mainly differ in small organizational ways. For example, component libraries are stored at the top of the InVision screen while XD keeps them at the bottom. Keyboard shortcuts vary as well.

XD offers a free and paid version, but most people need to pay for the platform to be useful.

InVision is a little more complicated. The design system is totally free to download. But like we said, it’s made to be used with the InVision browser-based collaboration platform, which has free and paid plans. InVision’s free options are way better than XD’s, but many users will benefit from a paid subscription.

InVision Studio is free to download. You’ll get full access to designing and prototyping features, including shareable prototype links and admin-controlled permissions levels.

The free version is limited to 10 team members and three projects/documents.

Upgrading to a paid plan unlocks unlimited projects/documents and allows 15 team members to join. You can pay yearly for a small discount.

InVision’s top-tier plan is made for big businesses. You have to contact the company to learn more about pricing. Upgrading unlocks advanced team management and security features.

XD’s starter plan has limited features. You can only generate one shareable link and collaboration options like component libraries are limited. Cloud storage is also limited to just 2 GB.

You can unlock all XD features for $9.99 per editor monthly. Each editor needs their own subscription to work on a collaborative project. Upgrading gets you 100 GB of cloud storage, shareable component libraries, Coediting features, and more.

Adobe encourages users to unlock the full Creative Cloud for $54.99 monthly. That gives you access to apps like Photoshop and Illustrator, which can be used in tandem with XD.

Both platforms mainly provide support through email. They also offer a huge range of help articles and community forums, so it’s usually easy to find answers to common questions. Both platforms offer premium support options for some high-paying users, but neither platform is very straightforward about what those options include.

Recommendations Based on Usage

InVision is great for developer handoff, but XD has better prototyping options. We recommend considering your project workflow before committing to either platform.

● InVision or Adobe XD for Prototyping

Basic prototyping is similar on both platforms. You can select elements and drag your cursor to create an interaction. Both support scrollable artboards and offer auto animation to transition between pages.

XD might be more useful thanks to voice prototyping. The feature lets you program voice command interactions like telling a virtual assistant to play a song. InVision can’t do that. Plus, we think XD is more intuitive, especially when you’re fine-tuning interactions or animations.

Both platforms can generate public links when you’re ready to share a prototype. Anyone with the link has access. XD links can be easily password-protected. Adding a password with InVision is a little more complicated and the feature is only available to Enterprise clients.

● InVision vs Adobe XD for Collaborating With Colleagues

On XD, Coeditng lets multiple designers work on the same project at the same time.

As we mentioned, InVision projects can be sent to the platform’s browser-based system for team review. Stakeholders can review the design, suggest changes through comments, and much more — but they can’t actively edit the design alongside you.

We recommend XD if you need to actively edit designs in real time with colleagues. If not, InVision’s online collaboration features are an excellent option.

Overall, InVision is better for developer handoff thanks to a much more comprehensive collaboration system.

Using InVision’s online whiteboard, developers and designers can answer questions and coordinate throughout the handoff process.

InVision is also better since the free plan lets 10 users join projects. You can share free prototype links in XD, but you won’t have the same diverse range of collaboration features.

● Which One Should You Learn First: InVision or Adobe XD?

Adobe dominates the creative industry, so it might be worth learning XD first if you’re just getting started in the field. It may also be easier to learn XD if you’re already familiar with the Creative Cloud — and real-time Coediting is very useful.

InVision benefits from great collaboration features and excellent free tools — but there’s no real-time Coediting option like XD. On the other hand, XD integrates well with other Adobe apps but you might miss InVision’s helpful handoff tools.

Which Is Better Adobe XD or InVision?

InVision is ideal for handoff. And the platform’s free plan includes way more features than XD’s Starter subscription. Teams on a tight budget should definitely consider InVision over XD.

However, XD is broadly used in the industry and Coediting makes it invaluable while working with other designers. You may also appreciate easy integration with Adobe apps like Photoshop.

Overall, InVision and XD are both useful. We recommend checking out InVision first since the free plan has top-tier design tools. If that doesn’t work, consider using XD.

Figma vs Adobe XD: Which Design Tool Should You Go With?

Zeplin vs Figma: Which Is a Better UI/UX Tool?