Home » Design » Figma vs Adobe XD: Which Design Tool Should You Go With?
Design

Figma vs Adobe XD: Which Design Tool Should You Go With?

Figma is an excellent tool if you need top-tier collaboration options. However, XD is better for prototyping and Creative Cloud integration. 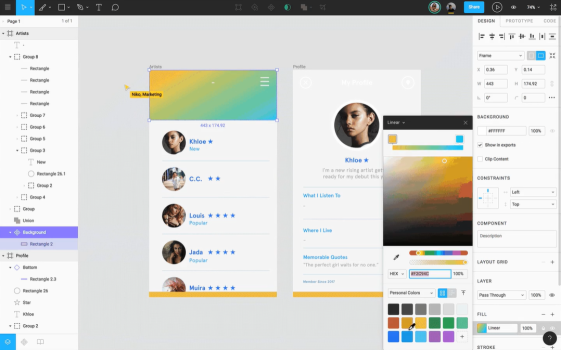 Figma and Adobe XD are the two leading programs for designing digital properties like websites and apps. Professionals across the industry use both systems to collaborate with colleagues and manage multi-stage projects.

Choosing which system is best for your project can be tough. To help you pick, I took a deep dive into both programs.

In this guide, you’ll learn more about the differences between each system, how much they cost, and their key features. We’ll also talk about ease of use and the learning curve so you can choose the best option for your workflow.

What Is Figma Used For?

Figma is a collaborative design tool working in the cloud. Teams use the browser-based system to create wireframes, prototypes, and other designs. Writers can add copy while designers work on visuals, then developer handoff is a few clicks away. Each stakeholder can view the project and make notes — all within a simple online interface.

What Is Adobe XD Used For?

Adobe XD is a vector-based design tool typically used for UI/UX design. The system has collaborative features like shareable libraries and Creative Cloud integration, which lets team members sync changes with the cloud so the whole project updates. Teams often use Adobe XD for easy designer-developer handoff and prototyping.

Teams can use both systems to collaborate on vector-based designs and preview projects. Both programs work on Mac and Windows, and each system has helpful built-in features.

In Figma, project owners can invite team members with various permissions levels. Some users can have active editing abilities, while others can only view the project or share opinions. XD offers a similar feature called Coediting, which allows users to edit a project together in real-time.

Figma and XD are vector-based, so scaling and updates are easy. Vector-based design also makes it easy for UI designers to make mobile-friendly changes, which both systems support.

The XD Plugin Manager is an easy way to discover and add plugins without opening a separate program. Figma has a similar plugin library that’s easily accessible.

Users can see previews on mobile browsers and desktops, which is perfect for sharing projects with clients or testing UIs. Both systems also have broad operating system support, including Windows and Mac.

XD is installed on your computer while Figma is browser-based. The systems also have different file compatibility, and Figma is generally much better for collaboration.

XD has broader file compatibility, but there are workarounds to get the same function out of Figma. For example, XD supports MP4 but Figma requires a plugin to embed videos.

XD can’t open Figma files, but you can convert them with a third-party tool.

XD files must be converted with a third-party tool to open in Figma. You can also copy and paste an XD project as an SVG file.

Which Is Easier to Learn: Figma or Adobe XD?

XD will probably be easy to learn if you’re familiar with Creative Cloud. XD’s user interface might also be more intuitive for new users.

XD and Figma are both somewhat easy to use. However, Figma offers many more native tools and features than XD. You can generally get the same functionality out of XD, but you might have to add a plugin, which can slow down your workflow.

Since Figma has more versatile tools built in, the interface might seem a little crowded. The system mostly does a good job of organizing each option, but digging through the program to find what you’re looking for could be frustrating when you’re still learning.

However, I’d argue Figma wins thanks to vector networks. In XD, vector drawings have a definitive direction based on their original point. Figma uses a more versatile system that lets you create without a defined direction. As a result, making complex shapes and updating vector objects is easier with Figma.

Figma and XD have hundreds of plugins. Anyone can make them, and you can easily discover them through each system’s plugin marketplace.

Keep in mind that some plugins replace built-in features, like adding videos via plugin in Figma versus uploading MP4s in XD.

You can access the Figma plugin marketplace from a project screen. After installing, you can only run one plugin at a time.

XD plugins are found under the Add-ons tab. The marketplace includes a wide range of third-party options. Although not technically “plugins,” you can also connect XD with other Creative Cloud apps to improve your project, like quickly opening a Photoshop file within XD. You can’t do that in Figma.

Figma and XD have hundreds of free templates and UI kits.

XD wins with official kits from Google, Apple, and other industry leaders.

As I mentioned earlier, both systems have solid platform compatibility. However, Figma wins this category with browser support. Access to projects from almost any browser is a huge plus, especially if you use Chrome OS since XD doesn’t work on Chromebooks.

XD partially works offline, but you’ll need internet for full functionality. Syncing projects with the cloud can be a little slow, and some users report a delay while Coediting.

Overall, I’ve found that Figma is faster at syncing projects between editors and saving to the cloud. Plus, better collaboration options make Figma editing quicker.

Both programs offer free and paid versions. Figma’s free plan is less limited than XD’s, but most users need to upgrade for either system to be useful.

Starter gets you three project files and three FigJams (Figma’s collaborative workspace where team members share ideas). Projects are limited to three pages and you get 2 GB of cloud storage. You can connect an unlimited number of collaborators, and you get access to plugins, templates, and widgets.

Organization offers advanced features like company-wide libraries, system analytics, and support for private plugins made by your team. This plan is best for large projects and businesses. Upgrading to the highest-level plan costs an additional $30 per editor monthly and unlocks advanced security features.

This plan lets you access limited XD features. You can design and make prototypes, but Coediting is limited to one collaborator, and sharing options are restricted. You also get just 2 GB of cloud storage compared to the paid plans’ 100 GB.

The paid plan lets you install XD on two devices, but you can only run it on one at a time. All features are available at this price.

You get access to over 20 creative cloud apps with this subscription, including XD. All features are unlocked at this price, and you can use XD on one device at a time.

Figma vs Adobe XD Recommendations Based on Usage

For prototyping, XD offers better interactions. For component libraries, each system is basically the same. The key difference is collaboration. Figma is way better for teams, which can make things like developer handoff easier.

Figma or Adobe XD for Prototyping

You can make interactive prototypes with both systems, but XD is more useful. The program lets you add more types of user interactions, and it’s better for combining multiple interactions on a single item.

Component libraries are similar in both systems. You can individually change instances, or update everything through the main component. You can also update the component by pushing changes from an instance to the main itself.

Figma is better overall for building design systems since they can be more granular. For example, XD can’t create standards for effects like blurs — but Figma can.

Figma or Adobe XD for Collaborating With Colleagues

Figma is the clear winner here. I’ve found that the system is much better at every stage of collaboration, from working with designers to developer handoff.

Notably, FigJam makes coordinating projects easier. The system is built into Figma and lets you work collaboratively on a digital whiteboard. Users can share ideas, develop project roadmaps, and brainstorm. You don’t get any of that with XD.

Handoff is really easy with XD. You can send developers a password-protected link where they view your prototype, add comments, and download files. XD generates CSS code based on certain aspects of your design, making development faster.

With Figma, developers can view projects via email invitation. They don’t need edit access to view prototypes, which means they don’t need a paid Figma membership. Figma will generate CSS for portions of your design. Developers can also view style guides and layout grids to ensure the code matches the prototype.

Handoff is easier with Figma thanks to better collaboration features. Plus, CSS generated by Figma automatically updates when designers make changes. In XD, you have to manually refresh the code.

Should You Learn Figma or Adobe XD First?

Learning XD will match your workflow if you’re already active in Creative Cloud. But if you need excellent collaboration options and more vector controls, Figma is better.

Figma is ideal for collaboration, but XD has valuable UI kits and helpful Creative Cloud integration. Unlimited storage with Figma is a huge plus, but active Adobe users will probably get more functionality out of XD.

So, is Figma better than Adobe XD?

Ultimately, Figma is an excellent tool if you need top-tier collaboration options. The cloud-based system makes teamwork easy, and valuable features like vector networks are hard to beat. (Unlimited cloud storage is a nice bonus too.)

However, XD is better for prototyping and Creative Cloud integration. Plus, it offers valuable UI kits from industry leaders like Apple and Google.

The best tool for you depends on your workflow and the programs you already use. If you still can’t decide, try the systems’ free versions. You’ll find valuable features with each.

Figma vs InVision - Which is a Better UI Design Tool?

InVision vs Adobe XD: Which Is a Better UI/UX Design Tool?